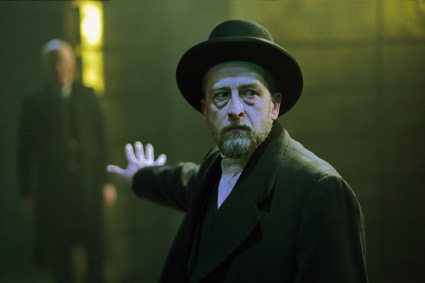 Ian has worked as an actor extensively in Theatre, Television, Radio and Film since graduating from The Guildford School of Acting in 1976. From there he went straight into Theatre in Education, followed by Repertory seasons at Farnham, Colchester and Chichester.

He then became a member of 'The Fireflies of the Boulevard' Theatre Company performing two Christmas shows at the Lyric Hammersmith, and then on a national tour playing 'Truffaldino' in the Duncan/Ultz production of THE SERVANT TO TWO MASTERS.

Ian then spent three years at the National Theatre working primarily with the director Richard Eyre and the writer David Hare, playing alongside Anthony Hopkins in the original production of PRAVDA, and Rik Mayall in THE GOVERNMENT INSPECTOR, as well as the award winning productions of GUYS AND DOLLS with Bob Hoskins and Ian Charleson, and THE BEGGARS OPERA with Imelda Staunton.

For the Royal Shakespeare Company, he played 'Shylock' in THE MERCHANT OF VENICE which toured England, China, Malaysia and Japan, and as 'Pantalone' in THE SERVANT OF TWO MASTERS, touring the to Washington D.C. and South Carolina in the US, Hong Kong, Tel Aviv and Perth in Australia.

Other highlights include THE FRONT PAGE at the Donmar Warehouse directed by Sam Mendes and playing 'Jimmy Tomorrow' in the Almeida Theatre/Old Vic production of THE ICEMAN COMETH, alongside Kevin Spacey.

He was nominated for an Olivier award for the London production of INTO THE WOODS by Stephen Sondheim, and again for a British musical called RADIO TIMES at the Queens Theatre. Other West End credits include TOMMY at the Shaftesbury, DEAD FUNNY at the Savoy and SHAKESPEARE IN LOVE at The Noel Coward.

He played 'The Fool' in KING LEAR opposite Tom Courtenay at the Manchester Royal Exchange, and 'George' in 'WHO'S AFRAID OF VIRGINIA WOOLF?' at the Liverpool Playhouse.

In 2010 he won a Manchester Evening News award for Best Supporting Actor for his portrayal of 'Doolittle' in PYGMALION, again at the Royal Exchange.

In 2011 he played the title role in Bertholt Brecht's, THE RESISTABLE RISE OF ARTURO UI, for Liverpool and Nottingham Playhouses receiving outstanding reviews. ( Click here for theYouTube video)

On film he has appeared in SHINER, BREAKOUT, MAX AND HELEN, EISENSTEIN, A PRAYER FOR THE DYING and DENIAL.

Since 2018 Ian has been seen regularly on television in CORONATION STREET playing 'Geoff Metcalfe' for which he has received 4 Soap Awards including Best Actor.